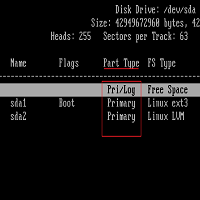 This is a guide on how to check if a partition is primary in centos or not? Use the following command: 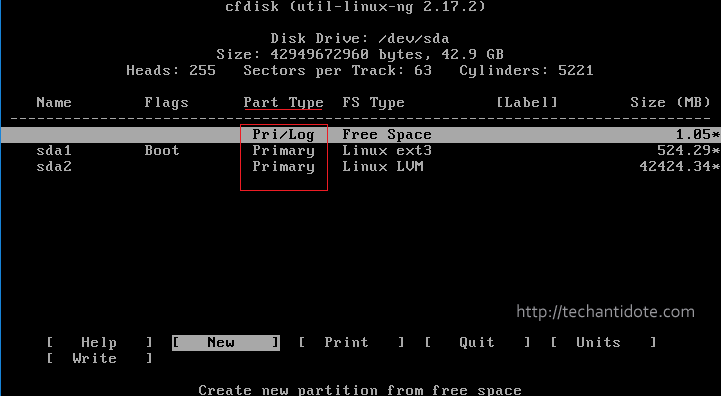 As shown above, the field under “Part Type” would suggest if that partition is Primary/Secondary.

To exit out of the cfdisk menu, use your arrow keys and move the selection to “Quit” and hit Enter in your keyboard. 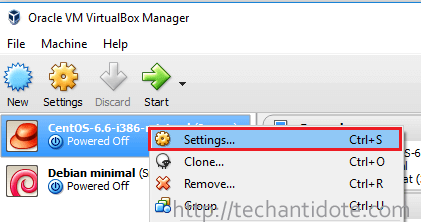 If your host PC (in my case Windows 10) is connected to a VPN but your CentOS 6.x VM is not using the VPN, then do the following:

1: Power off your CentOS VM.

3: Click “Network” and change the Adapter Settings to “NAT“. 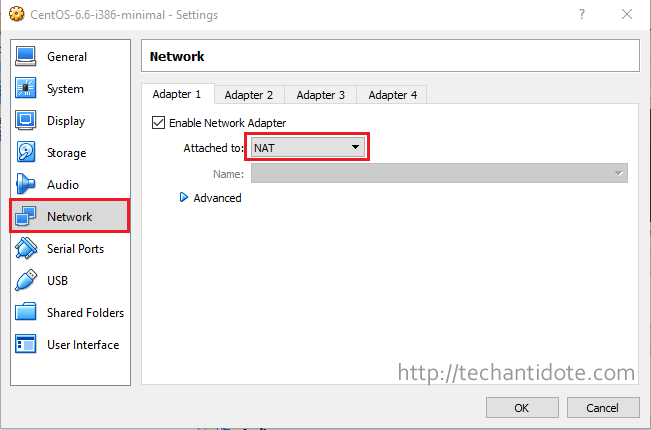 5: Once your VM boots up, login and then restart the network service. You can use the following CLI command “service network restart“.

Your CentOS virtual machine should now to able to use the VPN connection and use it accordingly. Do verify the same in your virtual machine. Hope this helps! 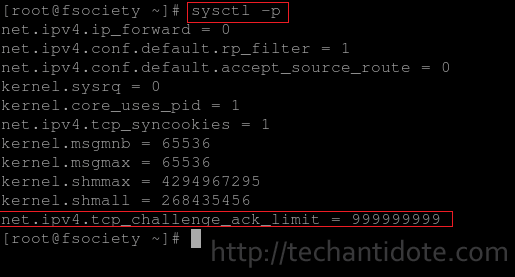 This guide on how to protect against Off-path TCP vulnerability CVE-2016-5696 in a CentOS 6.8 machine.

Run the following command to check the kernel version that your box is running:

Run the following to verify your Centos version details:

Below is a screenshot for the outputs for the above commands from my CentOS 6.8 box.

Workaround against the attack:

Below is a screenshot of my default sysctl.conf file which does not contain “net.ipv4.tcp_challenge_ack_limit”. 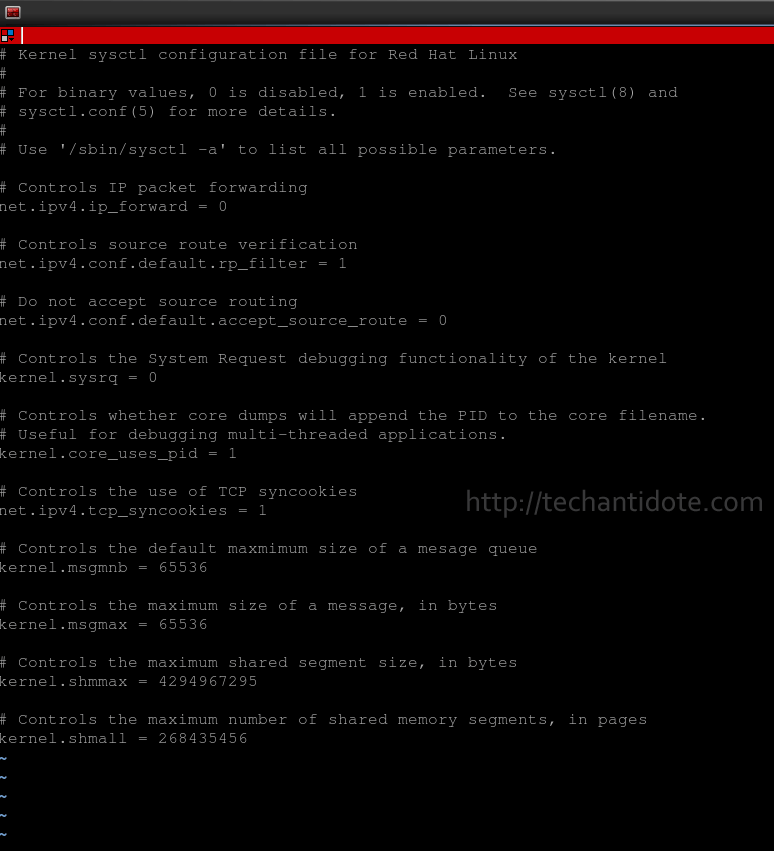 Now add the following line at the end of the config file:

Below is a screenshot after editing the config file. 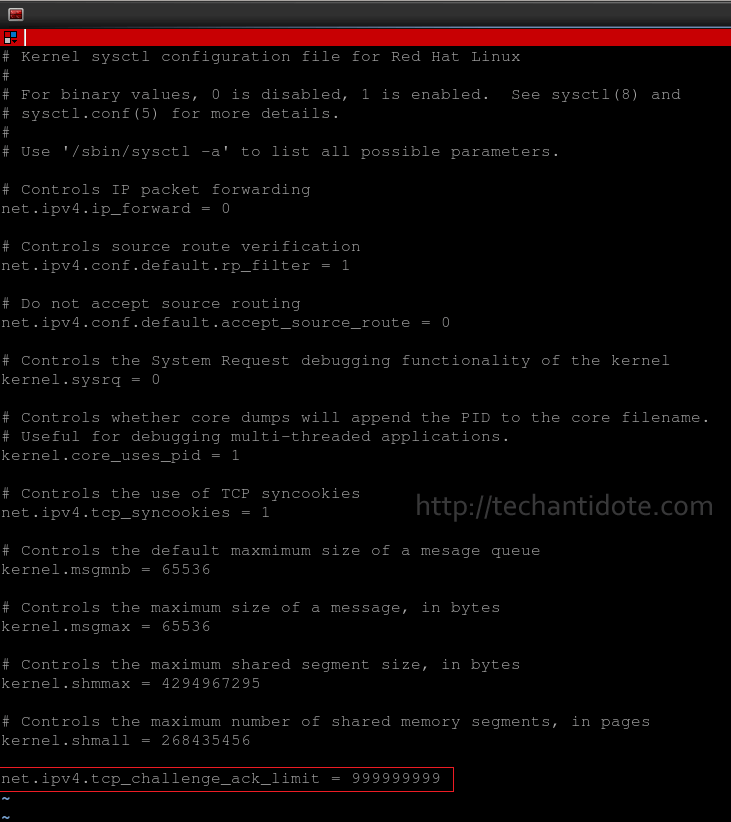 Save and exit the file. (Press ESC and then type :wq and hit Enter in your keyboard).

Use the command below to verify if the value of net.ipv4.tcp_challenge_ack_limit is 999999999.

If you are able to see the line in the above screenshot, this means that it will make the exploit extremely hard to perform (practically impossible). The above is a workaround to mitigating the Off-Path TCP attack in a CentOS 6.8 machine and will also work for redhat 6.8.

If you are not looking for the workaround but for a permanent fix, then you can upgrade your Linux kernel to 4.6 or above.

In your Linux terminal, type:

Now, if you want to run this command again i.e the (previous command), type the following and hit ENTER:

This will run the command which was previously typed i.e ‘ls -l’.

For this example, lets create an empty file one.txt:

Now, lets use the following command:

Lets break down this command according to its arguments:

[ Note: We can logically say that the 0th argument is the command cp itself. ]

Lets say we want to edit the file “one.bak” (which is the last argument for command cp, we can use:

The above command is same as running ‘vi one.back‘. Also note that the !$ passes the last argument of the previous command to the current command vi.

Now, lets use the following command:

An alternative way to provide an argument from the previous command to another command is by using !:<argument number>. For example, to pass the 2nd argument of the last command, we use !:2 as follows:

Here !:2 means that we are passing the 2nd argument of the previous command.

To get the previous command: Press the UP arrow in the keyboard.

To kill a process when you are in the Linux terminal: Press <CTRL> + C in your keyboard.

Trust me when I say this, this shortcut makes your life easier. If you need to auto complete a command, you can use the TAB key in your keyboard. This is one the shortcuts that is used by most Linux users.

If you want to type ifconfig in your Linux terminal, you can start typing the command and then press the TAB key to auto complete it. In this case, type ifcf and then press TAB and it will autocomplete the command.

The TAB feature can also be used to autocomplete known information such as file names which are passed as arguments.

For example: Lets assume in the current directory that you are on has only two files first.txt and second.txt. Now, if you need to type this command ‘cat first.txt second.txt‘, then you can use the TAB shortcut to auto-complete it by following these steps:

Type cat and then type f and then press TAB to autocomplete it to:

Then type the first letter of the next argument i.e. type s and then press TAB, which it autocomplete the command to:

Press <CTRL> and <Right Arrow key> in your keyword to move to the next word(towards the right side of current cursor position) in your terminal. This is also applicable in Linux editors such as vi or vim.

Press <CTRL> and <Left Arrow key> in your keyword to move to the previous word/the word to the left side from current cursor position in your Linux terminal (or most editors). You can press it again accordingly, if you need to move the cursor one word at a time towards the left direction.

The above two shortcuts are useful when you are entering commands in the Linux terminal and need to correct a particular word in the command. This helps navigating back and forth between words/parameters in the command with ease.

To go to the 1st terminal, press CTRL, ALT and the function key F1 in your keyboard.

To paste previously copied text to your Linux terminal/editor, you can press the middle button in your mouse. Now, How cool is that uh? 🙂

To lock your Linux machine press <CTRL> <ALT> and the letter l in your keyboard.

And that’s it for now, hope its been informative. I will be updating this article in the future with more Linux terminal shortcuts  as soon as I find new ones, so stay tuned! If this article helped you, do leave a comment below and like us on Twitter and Facebook. Cheers! 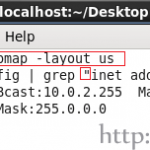 I encountered an issue in my CentOS VM where whenever I type the ‘ (single quote) or the “ (double quotes) in the terminal, they don’t get displayed. I did the following to fix the issue:

In your terminal window, type the following:

You should now be able to use single, double quotes or tilde symbols in your terminal.

The above command simply changes the keyboard layout to English (US) and this is under the assumption that you are actually using a English (US) keyboard in your PC.

You can check the screenshot below for reference.

Thanks and credits to this post that helped me resolve this issue.

Feel free to leave a comment in the comments section down below. Happy troubleshooting! Cheers!

Error: This kernel requires an x86-64 CPU, but only detected an i686 CPU.
This processor is unsupported in RHEL 7.

[Note: This tutorial is under the assumption that your physical CPU is 64-bit and your installed host OS is 64-bit and will only work in these circumstances.]

This mainly happens due two reasons:

Step 1: Right Click on the Centos/RHEL OS which is giving you the error and then click on “Settings“. Step 2: In General Tab, check the OS Type and see if you are able to change to “Redhat 64-bit” and follow step 4. 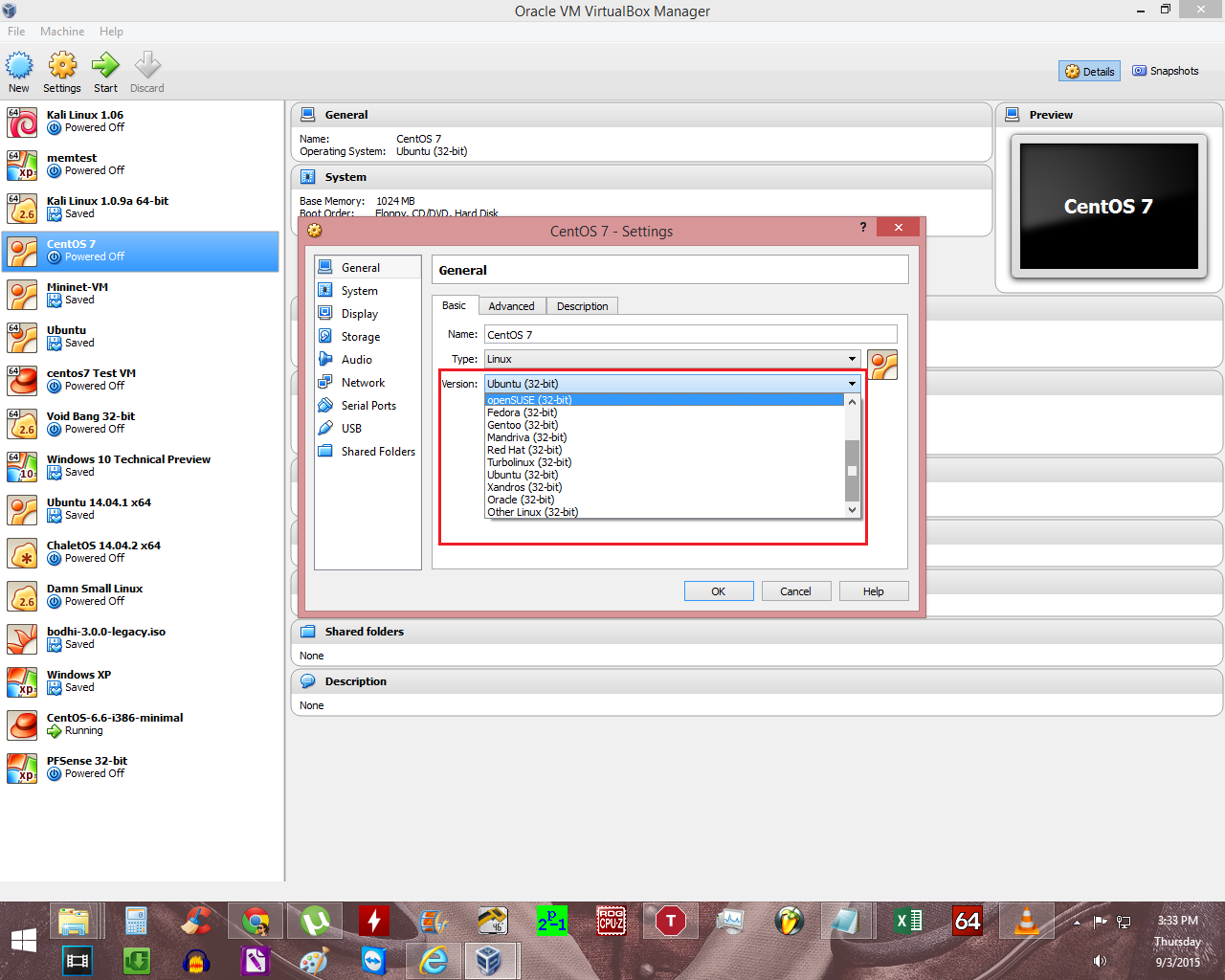 Step 3: If you are only able to see 32-bit entries in the OS type list and your physical CPU supports 64-bit, this means that Vt-X is disabled in your BIOS. So, restart your PC and boot into your BIOS, enable Vt-X.

For reference, I have a Asus Maximus VII Ranger Motherboard and here is how I enabled Vt-X in my BIOS.

[Optional: If your CPU supports Vt-d, enable that too, it will improve functionality and performance of your Virtual Machine. Some CPUs will not have the Vt-d function, if you dont have it then you can ignore it] 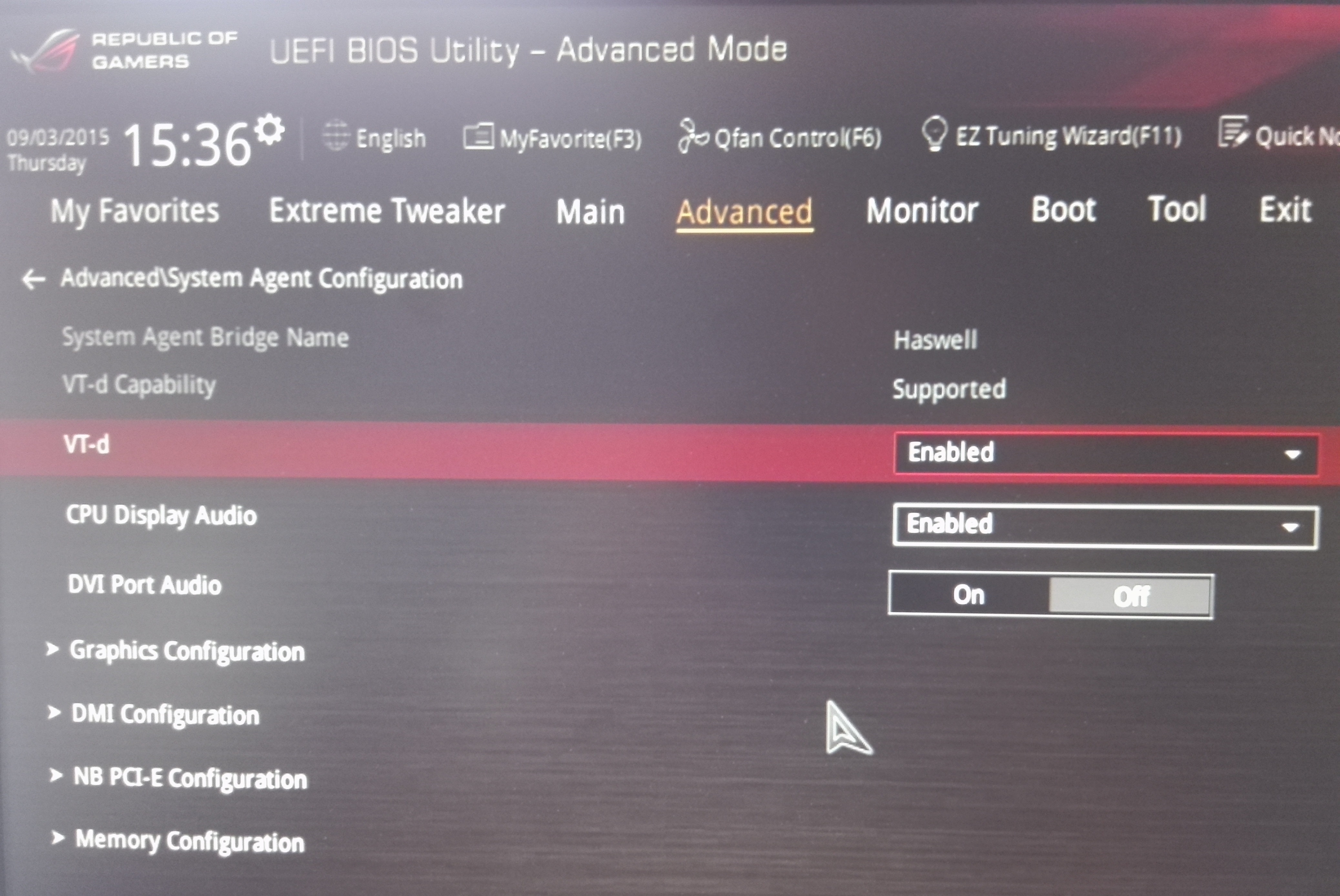 Step 4: Restart your computer and boot back your CentOS/RHEL VM and it should come right up.

Hope this fixed the issue. If this tutorial helped you,do  leave a thumbs up a comment below. Hope this helps! 🙂

If you have any sort of queries,  just leave a comment below and will get back to you. Don’t forget to follow my blog to get future updates! 😀