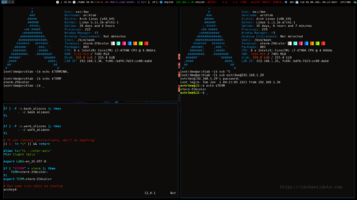 I am using “termite” on my ArchLinux machine but when I try to SSH to a remote linux machine(Ubuntu) to run some commands, it throws me an error “Error opening terminal: xterm-termite“. This a post on how to fix it.

The permanent fix is to edit your local ~/.bashrc file to include the following:

In my case, I had to add it to my Arch Linux’s ~/.bashrc file. (i.e not on the remote Ubuntu machine that I am connecting to)

Here is a screenshot from my box: (Right click image and open in new team to view in full screen) To verify its fixed, open a new terminal (or source ~/.bashrc again) and SSH into the remote machine. Ideally this should be fixed.

Note: If you terminal does not support 256-color, then you may need to change the TERM variable to “xterm-color” instead of “xterm-256color”.